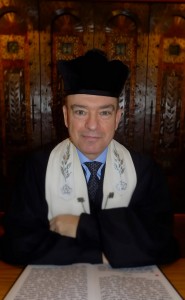 “Much of what we are, is the result of the choices we make. The Torah tells us we have to choose between life and death, as if guiding us to make the right choice in order to live happily.”

The choice to come to London and Belsize Square is certainly the right one for Cantor Dr Paul Heller and his family. Throughout his life, he has been faced with decisions about where to live and work and this opportunity to join the family of Belsize Square seems a natural path to follow.

Since his Bar Mitzvah, singing was always what he enjoyed doing most. He led the youth services at the German Synagogue in Bogota, and sang Musaf on Shabbat whenever the Chazan decided he should. He sang in choirs and performed as a soloist at a very young age. His voice training was overseen at the start by the choir directors, and later, in private lessons.

By the age of 22, he had already studied for three years at dental school, but decided that the life of a Cantor was for him. He applied to the Cantorial School at the Jewish Theological Seminary in New York and Leo Baeck in London, but travelled instead to Jerusalem to study Hebrew, Jewish law, and singing at the Rubin Academy. Those years marked his definite interest in living with prayer as his primary vocation, with the support of his tutors Rabbi Dr Meir Gurevich and Chief Rabbi Alfredo Goldschmidt.

Back in Colombia, where he was born of a Dutch mother and an Austrian father, who significantly influenced his vocal training, he was faced with their insistence that he finished his dentistry qualifications. So for ten years, after receiving a Doctorate in Dental Sciences, he combined his work as a dentist with taking over the Cantorial position at the Synagogue left by his mentor Chazan Joaquim Preuss. He was originally from Germany and helped Cantor Heller appreciate the joy and beauty of the Frankfurt tradition.

In 1996, after a recommendation from Colombia’s Chief Rabbi Alfredo Goldschmidt, Cantor Heller and his family moved to Ecuador, where he had been offered the position of acting Rabbi and Cantor of the community in Quito. Besides his pastoral work, Cantor Heller was instrumental in building Quito’s new Synagogue and Jewish Community Centre.

In 2000, Cantor Heller succeeded the Chief Cantor and composer Leo Rosenbluth at the 4,500 member Great Synagogue of Stockholm. After eleven years in Sweden, he learned a lot of the Great Synagogue’s tradition, largely influenced by the German and Austrian composers Louis Lewandowski (Berlin), Salomon Sulzer (Vienna) and Leo Rosenbluth (Frankfurt), always accompanied by organ and at High Holydays by a professional choir. Working closely with Cantor Maynard Gerber, they both performed almost all of the community’s 100 funerals a year and taught the by then average of 50 bnei mitzvah a year. They also gave courses in basic Judaism, did pastoral work and were in charge of the pulpit at various times, benefitting from Chief Rabbi Emeritus Morton Narrowe’s advice.

In 2011, Cantor Heller was offered the role of acting Rabbi and Cantor of the Jewish community in Medellin, which was celebrating its 80th anniversary. Here, he was instrumental in the renovations of the synagogue building, the creation of the Jewish Security Group and relationships with the other Jewish communities and interfaith relations.

Cantor Heller joined Belsize Square Synagogue with his family in June 2013, becoming its sixth Chazan. Since his arrival Cantor Heller has had the opportunity to sing with amongst others the Wallace Ensemble, the Zemel Choir and on several special occasions marking the 75th anniversary of the synagogue. He has sung in concerts and performed with our professional and community choirs at the International Louis Lewandowski Festival in Berlin, and also at Westminster Abbey during his first year.

“I am very proud to be the Cantor of Belsize Square Synagogue, well known for its music, and I look forward to many years serving the community as its Cantor and preserving its musical heritage.”

As an internationally acclaimed Cantor, Dr Paul Heller has sung at various occasions in presence of royalty, Nobel prize winners, prime ministers and other dignitaries.

Cantor Heller was a member of the Cantors Assembly for 12 years and is part of the European Cantors Association since 2013.

Cantor Heller is a proud father of Yohel and Michelle – both graduates of Regent’s University, London.