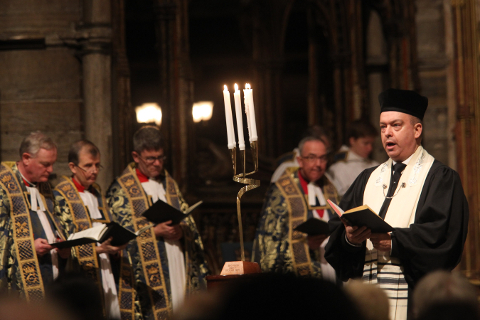 Cantor Paul Heller at the Abbey, with the Holocaust memorial candelabra.

Belsize Square’s cantor and choirs participated in a  solemn commemoration of the 70th anniversary of the liberation of Auschwitz at Westminster Abbey on 1 February. The service was led by The Dean of Westminster The Very Reverend Dr John Hall, and preparations were featured by the BBC. 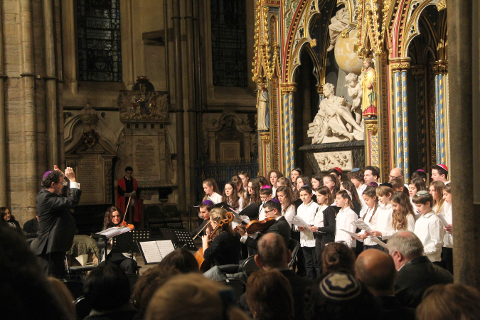 The Auschwitz concentration camp in southwest Poland was first constructed by the Third Reich to hold Polish political prisoners, who began to arrive in May 1940. The first extermination of prisoners took place in September 1941, and the camp became a major site of the Nazi ‘Final Solution to the Jewish question’. From early 1942 until late 1944, transport trains delivered Jews to the camp’s gas chambers from all over German-occupied Europe, where they were gassed. At least 1.1 million prisoners died at Auschwitz, around 90 percent of them Jewish. Others deported to Auschwitz included 150,000 Poles, 23,000 Romani and Sinti, 15,000 Soviet prisoners of war, 400 Jehovah’s Witnesses, homosexuals, and tens of thousands of people of diverse nationalities. The camp was liberated by the 322nd Rifle Division of the Red Army on January 27th 1945.