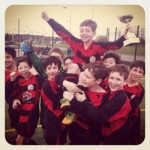 The sun was out and for the first time in what seems like forever the temperature was a balmy 20 degrees . All was set for the cup final.

With a large crowd of support cheering our boys on, we kicked off into a strong headwind as defending champions. We started a little nervously I felt, but soon got into a rhythm, closing down the opposition and breaking at speed from defence to attack.

The opening goal was a lovely move from back to front. The ball was played down the left and picked up just over the halfway line by Max Cutner, who dropped his shoulder, left a couple of defenders standing and put the ball right into the path of Rudy Berman, who with one touch took it out of his feet and then placed a lovely low drive into the Hendon net. 1-0 to the Reds of Alyth Belsize!

We held on to the lead for a good 10 minutes but gradually Hendon started to get back into the game, and sure enough a neatly taken shot looped in and just under the crossbar to equalise. The momentum had changed and, with the wind in their favour from their goal kicks, Hendon started to play ‘route one’ football – basically giving the ball a good hoof and letting the wind do the rest!

We had a couple of scares until finally, goal kick, hoof, massive bounce, confusion in defence and as a result a clear chance taken. From 1-0 up to 2-1 down!

Half-time, and for what must be one of the first times this season we found ourselves the losing side.

With the second half a mere 5 minutes old, the ball again broke to the left side where Eli Jay was on hand to chip in a delightful shot to make it 2-2. The rest of the half was a real end-to-end affair.

With the momentum now swinging back towards Alyth Belsize we were unlucky on two counts. Firstly, we won a corner and Max floated the ball into the danger area. With the assistance of the wind and the natural curl it went directly into the goal … but was disallowed as it seems the ball was not placed exactly on the correct spot. Then, we should have snatched the victory with almost the last attack of the second half. A slide-rule pass found Max free with only the goalie to beat. As Max went to shoot, the world seemed to stand still … but a magnificent save by the Hendon goalie meant this game was heading for extra time!

On the subject of magnificent saves, he may have forgotten that as a goalie he is allowed to use his hands, but I recall one moment when we were left flat-footed at the back and Jake Brass was out of the Alyth Belsize goal in a flash to make an essential clearance.

So, into the first half of extra time. With only 5 minutes per half, they seemed to fly past. Again with the wind in Hendon’s favour they pushed us a little too deep and started to gain the initiative. A corner was swung in and magnificently met on the head by a Hendon United player to leave us trailing by a goal again.

With the second half of extra time left to play we needed to score, and score we did! Again the pressure was piled on but by us this time, searching for that glimmer of a chance. A goal scramble ensued and able to poke home our equaliser with only a couple of minutes to spare was Ben Hurst!

But was there was still time for a winner, and to which side?

Hendon pushed forward and a hopeful shot was flung towards our goal. It was high, it was over Jake’s head, but was it over the bar, or not? This is where time stood still (again)… our experienced Club Coach Ivan Colomer-Martinez standing beside me on the sideline said it was dropping in, and he knows about these things! Then – literally out of nowhere – the ball was headed magnificently off the line by Rudy to keep us in the match. Fantastic positioning and commitment!

The whistle was blown and that meant only one thing … penalties!

Five of the players who were on the pitch when the final whistle blew volunteered to take a spot kick. They were Rufus Colman-Deveney, Eden Cohen, Max, Alex Godfrey and Rudy. I went with goalie Jake to have the rules explained to us by the referee and a coin toss to select who shot first. We won the toss (a good omen?) and Jake decided he wanted to go second. In the meantime, the order of the penalties had been decided by our captain Max!

So, we entered ‘sudden death’ (which many parents on the sidelines were watching through their fingers!). Back to Rufus again: a beautiful side-footed shot to the keeper’s right KAPOW 6-5!

Again, if they miss we win … the ball is struck well high to Jake’s outstretched right hand, but it’s too high, it hits the crossbar and bounces away!!! ALYTH BELSIZE WIN 6-5 on penalties!

What a game, and a real shame that two of our players were not able to attend, Gabriel de Leuw and Lior Solomons-Wise, but we won it for the team, the club and for the mums, dads, aunts, uncles and grandparents all too nervous to watch the dreaded shootout!

I have to say that each penalty was take superbly – such composed heads on young shoulders!

From the bottom of my heart I was so proud of each and every boy today; they all played their part, be it from the sidelines or on the pitch, whether they played the whole match or some of it. Football is a team sport, you win as a team and lose as a team, but ultimately you ARE A TEAM! And a winning team!!

There were some battling performances today. I think at long last we found Rufus’ best position, defence. Asher Hayes worked hard on the left, Ben grabbed that all-important third goal. Eden as always was a force in defence (when he’s not upfield!). Max as ever ran and ran – a true playmaker, when not shooting from the halfway line! Jake was The Man in goal – excellent as ever, but if only he would use his hands more! Eli played mid-defence and then left wingback and never gave up. Alex also battled hard in whichever position I played him, and a special mention to Oliver Abrahams – a true team player. However, I think for our opening goal and that spectacular header off the line, my Man of the Match goes to Rudy.