We are delighted to introduce Rabbi Gabriel Botnick and family to our Synagogue.

Rabbi Botnick will be working with Rabbi Altshuler for the next few months as we get to know him.

Rabbi Botnick grew up in Cleveland, Ohio where his family are active members of the B’nai Jeshurun Congregation, which was founded more than 170 years ago by Hungarian Jews to bridge the gap between the early German Jewish community and the newer wave of Russian Jewish immigrants. It is a synagogue with an organ and choir and a history parallel to ours. Rabbi Botnick’s mother served as the first female president of the synagogue, during which time she recruited all three of its current clergy.

Why did he become a rabbi? Rabbi Botnick says that after university, he returned home to work in the family jewellery business and eventually to take it over. He had already been involved in BBYO and Hillel and became Youth Director of his synagogue. He told himself that he would go to rabbinical school upon retirement – not to serve as a rabbi, but simply to engross himself in Torah study. Then, having moved to Los Angeles, Rabbi Botnick re-evaluated this decision, inspired by a desire to connect with others, in order to bring the depth of our Jewish heritage to life for them. He studied in Jerusalem.

Rabbi Botnick comes to us from the Mishkon Synagogue, located in Venice Beach, California, founded more than 100 years ago as the first synagogue serving Jews on the west side of Los Angeles. Unlike in London, during Lecha Dodi the Community would open the front doors, overlooking the ocean, to welcome the Sabbath bride!

He has come to London with his wife Rabbi Rose Prevezer and daughter Lev. While Rabbi Botnick has not lived in the UK before, Rose grew up in Hampstead Garden Suburb and attended South Hampstead High School, after which she read Archaeology and Anthropology at St Hugh’s, Oxford, and stayed on at Oxford for her Masters in Visual Anthropology. Her rabbinate is focused on the intersection between arts and spirituality and she has just started working at JW3. Rabbi Botnick has visited London regularly to see his in-laws, so knows our city well. Lev loves dancing, playing football, making music, reading – and building LEGO. 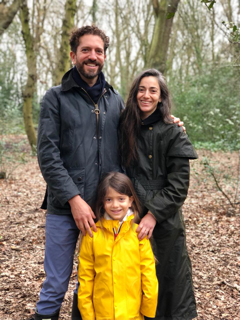