As you know, one of the priorities I set when I came to Belsize Square Synagogue three years ago, was to enhance our congregation’s scope of Jewish, intellectual, cultural and Zionist horizons.

Under the guidance of our newly formed Music Committee chairman, Phil Keller, we have created an extraordinary musical programme. Our musical offerings are beyond any in London or anywhere in the world. Our music is our treasure and we are indeed blessed.

The challenge has been to extend our focus beyond the limited walls of our own community. Our starting point for this is the celebration of our 75th anniversary on Friday and Saturday, 21 and 22 March. (The congregation’s very first service was held on Friday 24 March 1939 under the direction of Rabbi Dr Israel Mattuck and led by Rabbi Dr Werner Van der Zyl.) 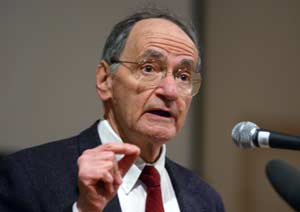 To help us understand the implications of this milestone in our congregational history, we will host our esteemed guest, Rabbi Dr Chancellor Ismar Schorsch. Rabbi Schorsch is widely considered to be the foremost scholar of German-Jewish history.

He is the son of one of Germany’s best-known rabbis from the generation prior to the advent of Nazism, Rabbi Emil Schorsch of Hanover. Having experienced Reichkristallnacht as a child in 1938, Ismar Schorsch immigrated with his family to the United States 75 years ago, in 1939.

I knew Rabbi Schorsch from my years at the Jewish Theological Seminary in New York. He was one of my teachers in Jewish history and we developed a close personal relationship. When he became Chancellor in 1987, he invited me to serve on his cabinet and advisory board, and continued to be an inspiration to me, and many others.

Ismar Schorsch was the sixth JTS Chancellor, following in the footsteps of his famous predecessors, Sabato Morais, Solomon Schechter, Cyrus Adler, Louis Finkelstein and Gerson Cohen. Foremost among his major works on Jewish history and Judaism is his brilliant series of Torah commentaries in Canon Without Closure.

Besides his chancellorship and guidance at the Jewish Theological Seminary — the Jewish world’s leading rabbinical school and academic centre for Jewish doctoral students — Rabbi Schorsch spearheaded Project Judaica, aimed at the USSR.  This Jewish studies programme in Moscow became the cornerstone of the revival of Russian Jewry and its lost attachments to Judaism. His public statements and writings have attracted wide attention in both the secular and Jewish press, including the New York Times and other leading papers.

His long-time support of the peace process was capped by an invitation from President Clinton to serve with the official presidential delegation which witnessed the signing of the peace treaty between Jordan and Israel in October 1994.

Rabbi Schorsch will speak about the origins of our synagogue, what German Jewry was like in 1939 and the issue of integration into a new culture, at a special Shabbat dinner on Friday 20 March and at Shabbat morning service on 21 March, and he will also lead a shiur after our celebratory community Kiddush.

We are so fortunate to have him as our guest for this special weekend. Through his academic credentials and achievements, Rabbi Schorsch has made modern Jewish scholarship a central factor in the reconstruction of Jewish identity and self-presentation.

Mark your diaries now and do not miss this opportunity to learn from one of world Jewry’s top rabbis, scholars and leaders.

One month before this event, on Shabbat morning 22 February, the newly arrived Deputy Ambassador at the Israel Embassy in London will be our guest speaker.

Eitan Naeh and I have known each other for almost 20 years. He and his wife, Cheryl, were members of my synagogue in Chicago when he was with the Israeli Consulate in Chicago in the 1990s. His son, Itai, was named in our synagogue and it is a memory we will always share.

He is articulate, eager to become part of our congregation and share his insights on his work for Israel. We will hold a special Kiddush to give him and Cheryl a grand Belsize welcome.

At the beginning of this month, on Monday 3 February, Dr Menachem Fisch, Professor of the History and Philosophy of Science at Tel Aviv University, with a keen interest in the relationship between science and religion, will be our guest scholar. He will address the issue of diversity and pluralism in rabbinic sources and relate those sources to interfaith dialogue, most notably the historic Nostra Aetate document that changed the relationship of the Catholic Church and the Jewish people. Come and take advantage of this extraordinary speaker and scholar.

Let this new month be a month of learning, laughter and celebration, a month of passion on behalf of goodness, Yiddishkeit and the State of Israel, and of making this world a better place each day.

This entry was posted in Rabbi's Message on January 30, 2014 by admin.